Why Stories are Important 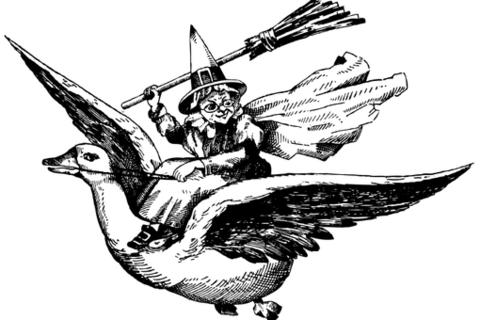 After my grandmother died, my mom told the story of her last minutes to everyone who asked. She’d been with her mother—my grandmother—at the hospital in Franklin, Indiana, and it was nighttime, around Christmas. She was about to leave when she noticed that it was snowing outside. She commented to those there that she was glad, that her mother loved snow. When she left, she watched the snow fall around her and on the lights and decorations outside the hospital. A peaceful knowing came over her: she knew that she wouldn’t see her mother alive again, but that it was ok. She drove to my uncle’s house. My grandmother was gone before my mom pulled into the driveway.

My mom will always tell this story, because she needs to know that her mother’s passing was a quiet, wondrous and good thing at the end of a wondrous and good life. It was acknowledged, not just by her, but by nature itself. This, for her, is the story of my grandmother’s death.

But it’s not quite enough—enough for her, perhaps, but not enough to share. Because there’s the story of what happened, and then there’s more. There’s the story you tell other people, and the story everyone needs to tell themselves. The after-story, the Er-story, the story that can feed everyone.

My mother and her sisters and brother talked a lot that week about where their mother was now. And there was a consensus among a few of them that she wasn’t in Heaven, exactly, because despite the presence of one aunt who is a Methodist minister, not everyone there believed in what Christians would call the traditional Heaven, myself included. My grandmother wasn’t a very religious woman either.

I don’t believe in the traditional Heaven as it was put to me growing up in the Methodist faith. I don’t believe that anything happens to our minds when we die that we, ourselves, will experience.

But I know that Heaven exists in the minds of many of us still living for a reason—it’s a story, and stories are important. Stories are the kind of comfort food that is endlessly share-able. And we need, in times of grief, to share and have things shared with us. We need narrative as much as we need the neighbor’s casserole. Stories are validation that Something Happened, and it Mattered. Here is What That Something Looked Like to Me. When That Something is connected to an image that is instantly recognizable, at least to the people you’re sharing your grief with, then I have to imagine your grief feels that much more in control. Placing your grief within the great swirling miasma that is our cultural consciousness is a powerful thing. You can pinpoint the place where your grief lives in the word’s imagination, and not just your own. 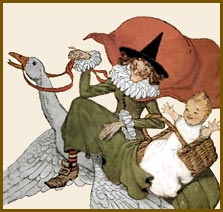 And so when my grandmother died, the fact that not everyone in the room shared the same version of her after-death story was a sticking point, at least for my mom. She’s more religious than I am, but for her the idea of her mother as a white-winged angel, rejoined with a husband with whom she’d only spent a fraction of her wide, full life, didn’t ring as true to her as she wanted it to. And she wasn’t the only one out of the five of them who felt that way. They needed, those motherless people who were my mom and her siblings, to have a story that could feed them all, regardless of belief in a Christian Heaven. They needed a narrative that they could all use as a balm for their mother’s absence. 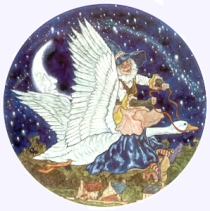 Several months later, my mother and I were in a used bookstore in Kingstown, Rhode Island. An especially great used bookstore, which had overflowing flat files full of ephemera and prints from history and biology texts, as well as children’s books that had simply fallen apart at the seams.

My mom and I were poking around; I was looking at the complete journals of Virginia Woolf, and my mom was wrist deep in a wooden flat file. She made a noise, something between triumph, recognition, and surprised sadness. As I watched from the next aisle, she tenderly set a page aside for herself and then rooted through the drawer with purpose, gathering a handful of pages from the drawer, counting off on her fingers as she did. I asked what she was doing. She told me she was getting something for each of my aunts and uncles.

I came around to the file and saw that it wasn’t organized according to author or illustrator, but had been labeled only, “nursery rhymes.” A whole drawer full of pages from vintage Mother Goose books, by various different—and mostly nameless—editors and illustrators. My mom proudly showed me the pile she’d amassed: five different illustrations taken from five different books, but all of the same iconic image.

“Look,” my mom said. She was teary-eyed. To be fair, she’s a weeper. But let’s give her this one. She held the papers out to me like a plate of fresh-baked peanut butter cookies. Like her mother had done all through my childhood.

The image in each of the pages she’d picked out of the drawer was of Mother Goose herself, a gray-haired woman in a black buckled hat astride an enormous gander with outstretched wings. In some versions of the image, Mother Goose is waving at an airborne cow leaping over the smiling anthropomorphic sliver of a moon. The five different versions of her stockings were striped yellow, green, blue, black and red against five deep blue skies twinkling with stars. There was no husband, no deity. Just a smile, a wave, striped stockings, and a full endless sky ahead.

“That’s your grandmother,” she said. And I believed her.

§ 4 Responses to Why Stories are Important

You are currently reading Why Stories are Important at Something to Read for the Train.