“‘The Little Mermaid’ Molded My Idea of Love,” and Other Terrifying Inanities

This post has been in the making for two months. At first, I didn’t write it because it seemed petty—but the thing that started this long indecision, the errant article published online by someone who clearly just doesn’t know any better, has stuck with me for weeks, and I’ve figured out, finally, why.

Here’s what started it: this article, written by no one I’ve ever heard of on a site I am not familiar with: http://globalgrind.com/node/821245

Looks to be a pretty cheaply written entertainment site, somehow affiliated with TMZ and the like. The article in question is written by someone named Lindsey P, who is very upset about Julia Leigh’s new film, Sleeping Beauty, which casts Emily Browning as a sex worker who enters a drug-induced sleep every night, only to have men do what they will with her after she’s passed out. Nobody is trying to pass this off as rated G material, but Lindsey P is up in arms nonetheless:

I think it’s pretty ridiculous that there are directors out there who want to add these dark and gloomy tones to classic happy Disney movies. Do they not realize that there will be little girls and maybe even boys out there who want to see their favorite princess have the overly joyful happy ending with the handsome prince on their arm? At this point, no childhood memory is safe!

Lindsey P’s argument is that filmmakers should at least re-name these “twisted and gloomy” films, so that poor, naïve children won’t get fooled thinking that they’re the “classic Disney princess movies” that we all KNOW are the originals. Those crazy filmmakers! What do they think they’re doing, using Disney stories this way? Oh woe, woe is Lindsey P.

And upon my first read, I just laughed it off. (Well, laughed it off and left a comment, because we all have our weaker moments, don’t we?) This is probably some high school student, trying to write a persuasive piece for the first time, and somebody showed her how to upload it to a site, I thought. Who cares?

But as I tried to go on about my life in the following weeks, the article kept popping into my head, aggravating and infuriating me. I found myself wanting to throttle Lindsey P, to give her a good talking to. Why? I kept asking myself. So someone wrote a badly written, conservative essay and it’s online. If that gets you every time, you’ll be dead of stress before you hit 30.

But it kept coming back, and each time I realized that I was thinking about this article, I’d get angrier and angrier. Finally I had to ask myself: what is it about this article in particular, this girl’s problem with fairy tales that has your goat held so firmly by the leg?

When I went back and read over the offending piece again, I found what had stuck in my craw, so to speak. Here’s the choice tidbit:

When I was a young girl, I looked towards fairy tales to mold my idea of love. They were what I wished for myself when it came to falling in love and learning about life… I wanted to be like Ariel, not only so I could swim and have cute fishes and a lobster as friends, but so I could meet a handsome young prince to sweep me off my feet. What girl wouldn’t want a love like that?

She’s saying that The Little Mermaid taught her everything she wants to know about love and life.

There is no hope left for humanity.

A couple weeks ago, I wrote about Catherine Breillat’s Sleeping Beauty which, to me, seemed to be illustrating precisely the danger that Lindsey P is now making herself a poster child of. Stories, I claimed in that review, are double-edged swords. They’re layered with meaning and history, and if you’re going to set off into the world with a story as your guide, then you had better know two things: 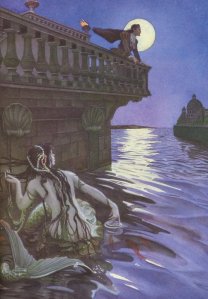 So what frightens me most of all about this article, and others like it, is not that we live in a generation in which there is an ideal audience for a question like “Everyone knows the story of Snow White, but did you know that this wonderful Story wasn’t Disney’s creation?” Though the ulcer brought on by inanity like this will surely lead to my early, bitter demise, what goads me the most is that, by mapping their lives by the standards set in these stories, we’re witnessing a generation of girls who have no clue who they are, where they come from, or what love means.

Because what Lindsey P has confessed above is that she really wants a love that causes her to endure intense physical pain, completely annihilate her personal identity, and render herself literally and figuratively voiceless.

Good luck with that, sweetheart. And that’s just what Disney decided to include from the original version, written by Hans Christian Andersen in 1836.

“A love like that” in Andersen’s original tale means annihilation of personal identity, literal and figurative voicelessness, excrutiating physical transformation followed by the intense pain of stepping on imaginary knives every time you take a step on your new legs. Then finally, after your lover falls in love with another, completely faultless princess (not a disguised witch, which would at least give you the satisfaction of knowing he was under an evil spell), you die.

Yes, die. But you’re still not done with your perfect love! Oh, no. After you leave your prince to enjoy sexy times with the girl he married instead of you (and why wouldn’t he—I mean, you don’t even talk. You are very boring.), you then get to spend three hundred years doing good deeds in order to earn your place in Heaven. You don’t automatically earn one for being such a good long-suffering girl, because MERMAIDS DON’T HAVE SOULS. Bummer.

Hans Christian Andersen (who rivals Abe Lincoln for the space in my heart reserved for delightfully awkward-looking historical figures) was never in the business of writing love stories. His work “celebrate(s) the virtues of physical distress and spiritual anguish” (Tatar, The Classic Fairy Tales). His stories about delicate, plighted young females are always cathartically tragic and driven by melodramatic descriptions of the characters’ piety and self-sacrifice. Consider “The Red Shoes,” in which Karen, a young girl, covets a pair of outlandish red dancing shoes. Once the shoes are on her feet, she cannot stop dancing, and is doomed to live her life as a perpetually-moving, homeless and friendless living lesson to other children. It’s only when Karen’s feet are chopped off that she can make her piece with God.

And who doesn’t remember “The Little Match Girl,” who freezes to death on a cold New Year’s Eve, watching the warm celebrations through the windows lining the street? She gets taken up to Heaven by her dead Grannie, and the folks who find her body the next morning never “knew what lovely things she had seen, and in what glory she had gone with her old Grannie to the happiness of the New Year.” Maurice Sendak, whose characters (Maria Tatar points out) are “vibrantly spirited and scrappy,” has no tolerance for Andersen’s “irritating,” passive, and sentimentalized heroines: “they rarely have the spunk, shrewdness, and character with which (Andersen) endows inanimate objects.”

Now, I’m no Pious Polly, and I do my fair share of eye-rolling at much of Andersen’s heavy-handed pathos. So when talking through these Lindsay P related frustrations over coffee with my boyfriend (a very rational man whom I did not, as it turns out, rescue from a sinking ship or give up my identity to be with), he led me to ask myself a very good question: why is it that I rail so much against Disney, but I don’t preach against pious Hans Christian Andersen?

Here’s one reason, the simplest  and least important: the suffering and the violence, which Disney cleans up and leaves out. My love for Andersen’s stories is a different kind of love than the one I have for the Grimms’ tales, whose young heroes always come out on top, and whose villains are the ones who suffer gleefully inventive deaths. When I read Hans Christian Andersen, I may gloss over the morality lessons, but I am sincerely compelled by the plights of his characters. Andersen’s stories have the epically tragic tone of many Bible stories. And as a kid in Sunday school, I gobbled those up, not because of any religious zealotry, but because they’re just so damned tragic, spectacular, and strange. It’s about catharsis, not morality, and certainly not about romance.

Now, Disney. Sure, I loved those films as a kid. I grew up with them, the same way Lindsey P did.

But to answer my own question more fully, why I can’t stand them now: I have come to loathe Disney BECAUSE of people like Lindsey P. The readers of Hans Christian Andersen have never given me a reason to wonder if there’s some Kool Aid that I missed drinking. In fact, the people I’ve met who love Hans Christian Andersen the way I do are people who enjoy reading, enjoy thinking about what they read, and are self-aware enough to know the difference between their own experiences and hopes and an ideology that hangs like a thin cloud over a particular story. 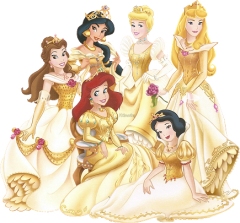 On the flip side, I am mistrustful of a culture of girls who claim that Disney is the biggest influence in the picture they have of their lives, yet they don’t see the importance of acquainting themselves with the history of that commodity that Disney is supplying. “I don’t know, I just like it,” or “I just want to be entertained” are excuses of a lazy mind, and when the owner of that lazy mind then assigns a false narrative to that commodity, they perpetuate a culture of denial and of ignorance—of false  consciousness. They are placing a label onto themselves that lacks substance, and they refuse to substantiate that label by taking even the easiest, Google-searchiest look at that label’s context. It makes me fearful of what hell Disney has wrought in the minds of the women of my generation, who are willing to accept something at face value, and call themselves by the same name. Obviously not all Disney fans are like this—we all have our guilty pleasures and our childhood memories. But as a fairy tale enthusiast and a toy store employee, I am hyper-aware of how many pretty princess wannabes are out there who have no clue what their stories are actually teaching them.

History stretches out behind these girls like a ribbon unspooled—girls like Lindsey P grab the end and keep moving forward, never looking behind them to see others like them around whose neck the ribbon is tied.

So do me a favor, readers, if you’ve made it this far into this little rant of mine: don’t go comment on Lindsey P’s article like I did, because it won’t do any good.

Just take the time every once in a while to remind yourself why you love the stories you love, and where those stories came from. Like I said, know your stories. Know yourself. Know where the two intertwine.

§ 4 Responses to “‘The Little Mermaid’ Molded My Idea of Love,” and Other Terrifying Inanities

You are currently reading “‘The Little Mermaid’ Molded My Idea of Love,” and Other Terrifying Inanities at Something to Read for the Train.