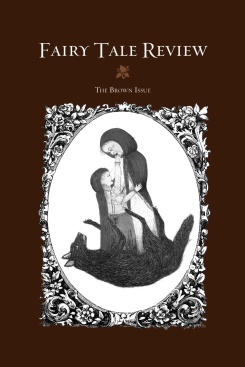 A father changed into a giant of earth, a dank basement haunted by a joyful, simple-minded porter, a dust-bowl burial that leads to the discovery of Devil’s gold. The color of mud, the color of death and life together, the color of change and transformation of the seasons. The Fairy Tale Review’s Brown Issue, guest edited by Timothy Schaffert, author of The Coffins of Little Hope, is packed dense with stories and poems whose minds are on the transcendent, but whose eyes are on the ground.

The Fairy Tale Review names each issue for a color, inspired by Andrew Lang’s iconic Fairy Books (my favorite, growing up, was The Lilac Fairy Book, which included “The Brown Bear of Norway” and “The One-Handed Girl”), and though not every issue has a stated theme, the color of each issue does provide the reader with a pre-packaged lens through which to read its contents.

“If ever there was a color more suited to earthly existence, it’s the color of earth itself,” Schaffert offers us in his guest editor’s note. “And certainly earthly existence is at the very heart of fairy tales, despite all the unearthly circumstances depicted.” In the Brown Issue, it is from dust we come and to dust we will return. That, and from fairy tales we come, and to fairy tales we return.

The Fairy Tale Review, edited by Kate Bernheimer, consistently balances stories and poems of two different (but not mutually exclusive) varieties: pieces that are written in more traitional fairy tale form, and pieces that feature characters who remember and are influenced by fairy tales. Sometimes the pieces cross over like a venn diagram of story, the characters becoming a mirror of the stories they recall. Take, for instance, L. Annette Binder’s short story “Lay My Head,” which sets the tone for what’s to come in the issue. We meet Angela, a young woman dying of a terminal illness. She is cared for by her mother, a German immigrant, who owns a yellow book of German tales that Angela remembers from her childhood. Angela sleeps like a cursed princess, her body weakening as the story goes on, and as she dreams her memory culls up the story of Hans im Gluck—Lucky Hans—who loses everything throughout the course of his tale in building degrees of hilarity, but is dim-witted enough to consider himself fortunate. By the end of the story, Angela’s senses are mixed and muddied, and her mother tucks her into bed like a child who has lost everything of her adult, independent life. In this case, the fairy tale is a shucking off of mortal possessions and intelligence, a returning to home, and from there, to nothingness. From fairy tales we come, to fairy tales we return.

The Brown Issue is taken by this notion of decay as a way into a story, and as we tend to tell ourselves when a long winter seems interminable, decay is only the beginning of a transformation, a change into spring. Transformations abound in the Brown Issue, often wondrous, often accompanied by descriptions of the mundane, the earthly—a stellar example is Ben Debus’s poem “The Sugar the Wind Brings,” describing an abandoned, dilapidated house and, in alternating stanzas, its gingerbread doppelganger in a woods far, far away. In this poem, the transformation occurs in the reader’s mind as she moves from stanza to stanza, until the two houses are the same, both foreboding and mythical, linked by a story.

For many of the characters in the Brown Issue, the everyday is set up against the wondrous in the most satisfying way, reminding us the readers (and often the characters too), that fairy tales are our origin stories, our parents’ freely given inheritance, our “way back to.” The what and where varies from story to story, poem to poem.

Schaffert’s choice to close the issue was, for me, a stand-out: Jim Tolan’s simple and haunting poem, “Devil Born,” in which a poor farmer, burying his wife, finds beneath the earth enough gold to buy her a formal, proper burial. The clergyman who had originally turned him away is so consumed by the farmer’s story of the gold that he kills a goat and uses its skin to disguise himself as the Devil in order to trick the farmer into giving him the gold in exchange for his wife’s soul. When the clergyman returns home, however, he cannot remove the skin, having become the Devil he sought to emulate. A perfect way to end the issue, I thought: a tale reminiscent of the short, dark European tales that have slipped through the cracks of popular culture, giving way to more lush Cinderellas and more vocal Little Mermaids. This tale, simply told, is a refreshing reminder of where we’ve been—exactly the kind of tale that the many wandering characters in The Brown Issue might remember having been told, once upon a time. We journey through through the pages of the Brown Issue in the presence of the lost, the rememberers, and what we return to is the dust of the traditional.

For all the love I have for the Brown Issue, and the work that The Fairy Tale Review does as a whole, I do have one small axe to sharpen: Scaffert makes a case in his editor’s note for brown being the color not only of dust and dirt, but of ancient and well-loved pages—the smell of age, the yellowing of papers. A sensation, Schaffert argues, one cannot get from an e-book. Perhaps he’s right that decay is something that belongs more to the world of paper and ink (That new book smell! That old book smell! I’m a fan as much as he is), though I would argue that brown, the color of earth, stands not only for what has always been, but what is. What we come to, what is now. And perhaps fairy tales could use a leg up in that department, rather than confining themselves solely to the bastions of leather-bindings. After all, in the somewhat magical world of e-books, a tale could remain immortal, its ability to tear, yellow, and age cast out by the magic spell of the information age—a glass coffin to keep the tales from crumbling into dust.

So where have I come to? The Brown Issue. Order it, read it, remember where you’ve come from. Remember that for every morning cup of dark brown coffee, there’s a cauldron somewhere simmering, and that like spring growing from decay every year, the fairy tale comes back around to surprise us with its earthiness, its familiarity, and its comfort.

In case you needed any further encouragement to log onto FTR’s home page and order a copy, I should tell you that there are not one, but two mentions of flamingos in this issue. Read, and celebrate accordingly.

You are currently reading The Fairy Tale Review’s Brown Issue: Dust to Dust, Tale to Tale at Something to Read for the Train.